Press Releases For Month: May 2018 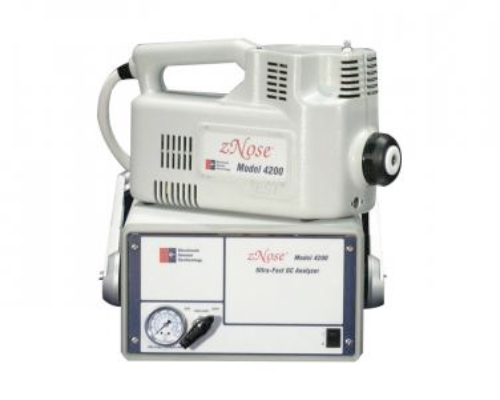 The zNose®chemical sniffers, recently featured in CBS Television’s CSI Miami, use advanced Surface Acoustic Wave sensors and ultra-fast gas chromatography to separate and analyze vapor samples in near real-time. The patented technology detects all compounds within an odor to provide a complete chemical profile, and the software includes an expandable library of over 700 chemicals and odor signatures, allowing the zNose to recognize virtually any target odor.

The zNose®can be used to measure:

- Salmonella and E-Coli contamination in food

- Chemical warfare agents such as Sarin and Agent Orange

- Purity and safety of milk and foods. Also applicable to cannabis: on-site, point of sale testing and certification assures the customer that the products are free from mold spores, insecticides, and other hazardous materials.

- Research on breath analysis for early screening of cancers and pulmonary diseases; clinical studies have shown that these types of analyzers can identify women with early stage breast cancer

Recently, Electronic Sensor Technology staff trained a sheriff’s office on the operation of the zNose®for detecting conventional explosives, plastic explosives, and drugs of abuse. The zNose®was demonstrated to detect and quantify the explosives and drugs, and the officers were very pleased that the product could complement trained dogs in detecting the substances.

Los Angeles, CA. May 9, 2018 - US Nuclear Corp. (OTCBB: UCLE) was recently awarded a $349,832 contract by Los Alamos National Lab to manufacture new tritium monitoring instrumentation for the Weapons Engineering Tritium Facility (WETF).  Los Alamos National Lab is planning to replace all the existing tritium monitoring instrumentation at WETF that was supplied by Overhoff way back in the mid-1980s, and this order represents the first step in that process.

US Nuclear/Overhoff will be supplying their new smart Triathalon tritium monitors, which will measure the tritium concentration in rooms across the facility and alert workers if the concentration rises. Robert Goldstein, CEO of US Nuclear, commented, “It is an honor to continue to outfit the WETF facility at LANL with our tritium monitoring instrumentation.  We supplied the original instrumentation nearly 33 years ago, so it is a testament to our quality and craftsmanship that it is just now being replaced and that they chose us again as the supplier.  We believe the customer will greatly appreciate the important new features and functionality offered by the Triathalon system, which includes an integrated computer and a color touch-screen display. Our unparalleled quality and design expertise make us the world leader in this field.”

US Nuclear will look forward to continue working with LANL and other government/DOE institutions to meet their tritium monitoring requirements.